I was up late last night enjoying the quiet in my house and looking for a way to entertain myself. I decided to make this character sheet in Excel that gave me some nostalgic feeling of the AD&D 2E character sheets I spent so much time with as a youngster.

This is not the coolest character sheet by far, but I got enjoyment out of figuring out how to arrange all the boxes. 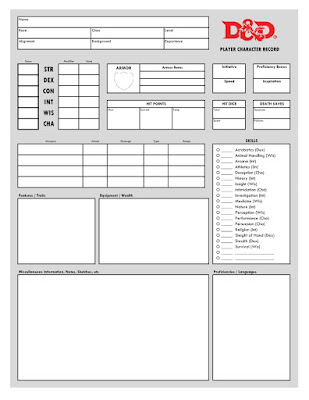 Posted by Jeremy Deram at 2:47 AM 5 comments

Buddies and Pets for 5E

I recently purchased the 5E Essentials Kit boxed set to play with my kids. It allows for the PCs to have sidekicks if you have a small party of only like 1 or 2 PCs. Provided are stat blocks and leveling rules for three sidekick types: Expert, Warrior, and Spellcaster.

I think this is a cool idea, but I wanted to provide more options, so here is the list I allowed them to choose from, which generally consists of CR 1/8 or 1/4 entries.
A mastiff and a blink dog were chosen. 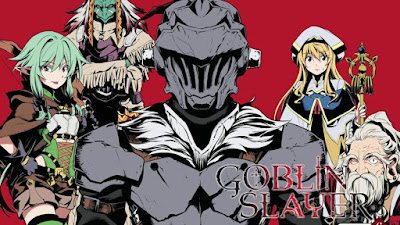 One of the interesting things in Goblin Slayer is the adventurer's guild ranking system. Level 1 scrubs start out as "Porcelain" rank, and if they survive through many adventures they can work their way all the way up to "Platinum" rank.

Posted by Jeremy Deram at 2:26 AM 1 comments

Over the past "shelter in place" weekend I got the opportunity to play in a handful of online games in lieu of going to GaryCon. One of the games was TOON, a game I first played in 1995. This session helped me remember all the things I love about TOON. Let me list a few of them here for you now:
Anyways, after the game, we were talking about doing some D&D-style dungeon crawls using TOON as the system. The more I've been thinking about it, the more excited I've gotten about the idea. I've been in search of the perfect mix of two of my favorite things - 80s cartoons and dungeon crawling - and I think this might be just what the doctor ordered.

Here are some draft character generation rules I've been thinking about.

Other Considerations
In playing a few online games, I found the sweet spot for the length of a session for me to be about 3 hours. Beyond that I would start to get burned out. Others' opinions may differ, but let's operate under this premise.

Small Dungeons: This game should run a bit faster than traditional D&D, so small dungeons of 5-10 rooms should be about right for a 3-hour session.

Running a Megadungeon: I think a fun way to run different groups through a megadungeon in short sessions would be to have some sort of teleporter at the beginning that transports the group to a randomly determined area in the dungeon. The dungeon rooms themselves should be somehow marked or labeled so that the players can create maps in each delve, and have a way to know how to stitch them together after the fact.

Classic TSR Modules: I first got this idea from hearing about Adam Thornton's "TOON of Horrors" game. It sounded to me like a great way to experience that classic module. Since you never actually die you could play it more aggressively and not have to worry about dealing with the death of a high-level character as you would in D&D. Why not play the other TSR modules on my shelf as well? There's less of a barrier to entry with TOON characters and casual players.

Posted by Jeremy Deram at 1:15 AM 2 comments

Email ThisBlogThis!Share to TwitterShare to FacebookShare to Pinterest
Labels: TOON 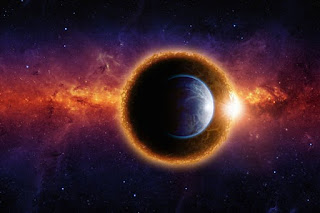 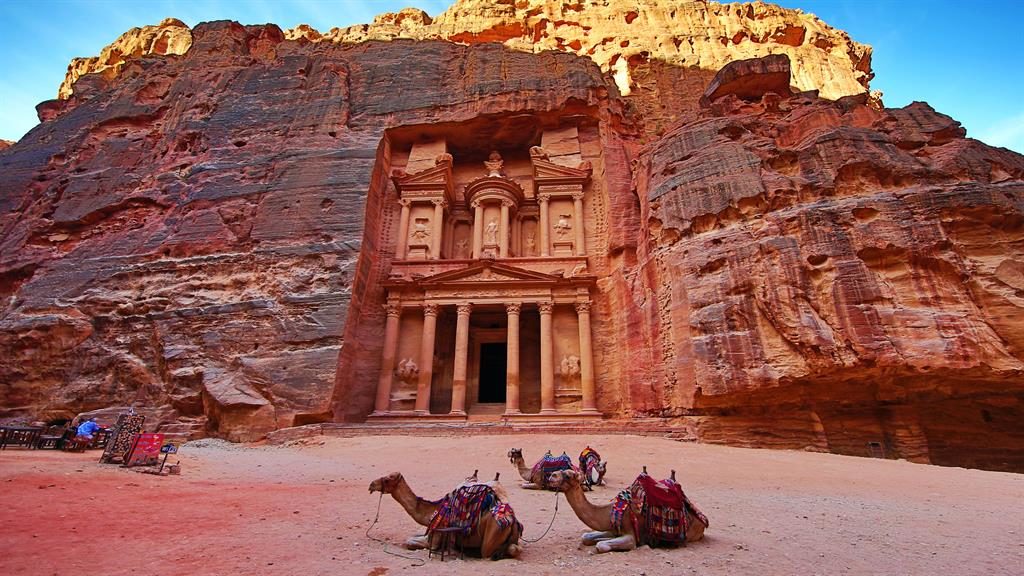 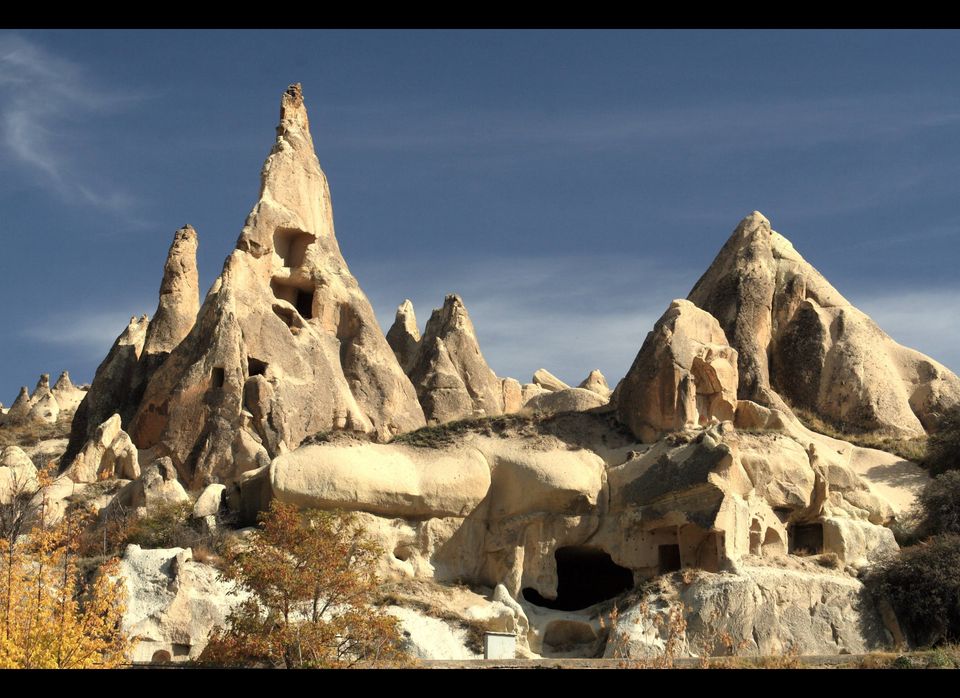 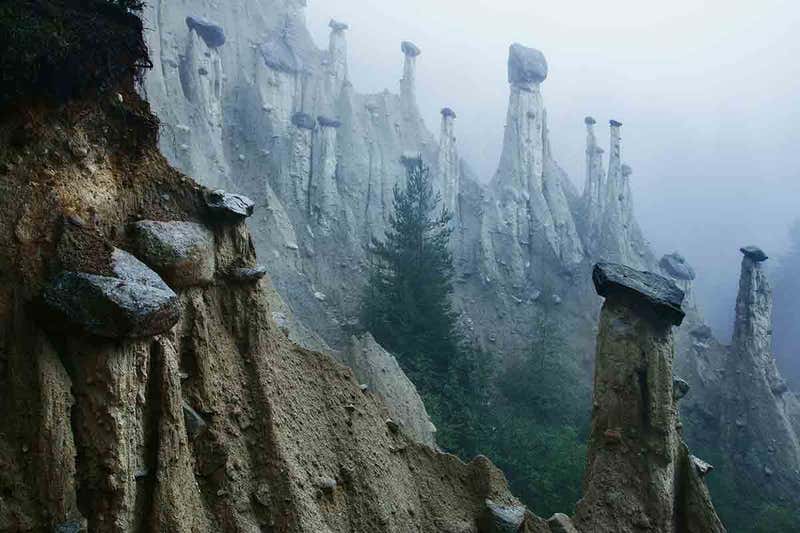 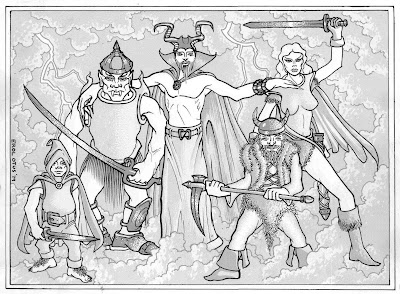 Rod of Seven Parts... In SPAAAAACE!

My 5E campaign is about 18 months old, and we just recently had our 12th session. We get together far too infrequently, but the campaign itself has really started to hit its stride in my opinion. Here are some highlights thus far:


So the quest to complete the Rod of Seven Parts will be headed into space before long. I'm much looking forward to it. I got the two main books from the Spelljammer boxed set from half price books a few years back, and I've been poring over those. I have some ideas for how to adapt a few of these things to 5E, although most of it doesn't require any changes. I'm using our real-life solar system as the framework for all of it, and they are currently on earth. It's going to be awesome! More posts soon!

The good folks over at Other Selves have been hard at work translating DCC content to Spanish language versions. Go here to check out all the stuff they have going on. I've also added links to the Spanish versions of the DCC RPG Reference Booklet to my DCC RPG Resources page.

For TOON or whatever gonzo thing you're into...

6 Alternatives to the +1 Weapon

+1 weapons rub me the wrong way. Maybe because the name has game mechanic math built right into it. I offer a few alternatives, none of which are ground-breaking, but at least the names don't have algebra in them.

Note: These were written with 5E in mind.

I'd love to hear any other simple ideas in the comments...

I made this booklet a while back. Might be useful to someone!