For TOON or whatever gonzo thing you're into...

6 Alternatives to the +1 Weapon

+1 weapons rub me the wrong way. Maybe because the name has game mechanic math built right into it. I offer a few alternatives, none of which are ground-breaking, but at least the names don't have algebra in them.

Note: These were written with 5E in mind.

I'd love to hear any other simple ideas in the comments...

I made this booklet a while back. Might be useful to someone!

I've attempted to port the DCC Warrior to 5th edition. I'd play it. Check it out HERE. 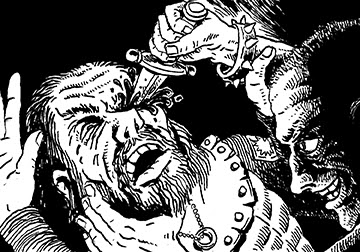 Posted by Jeremy Deram at 2:15 AM 7 comments