...and I am very much looking forward to it! 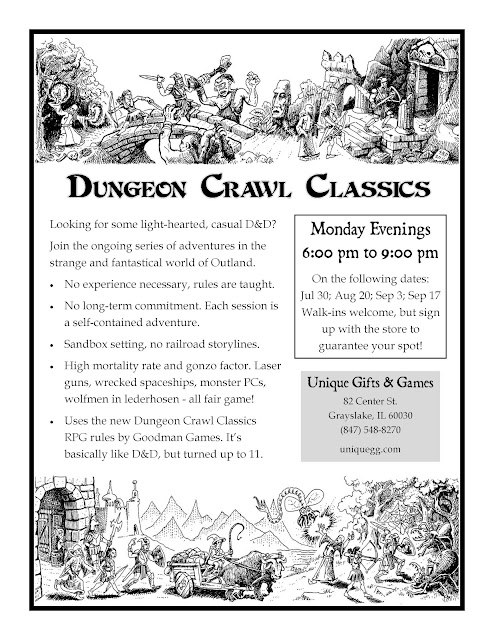 
I've finished converting all my Outland stuff for use with DCC, which will be used as the system of choice going forward (at least until I change my mind again). If you are interested in such things, everything is accessible from the new page I added here.

I made a number of changes to the character generation process. I didn't have them documented at the time I ran the first game with my new home group, so it actually took a fair bit of time for me to help 6 people with making their characters, but it was a fun process in and of itself, and everyone got at least one wacky race - most people had two. Also, I can't for the life of me remember where I got my unique item list, but I think it was a d100 table where someone expanded upon Jeff's original Deck O' Stuff. If anyone knows what it is, I'd love to know so I can link to it. Hint: One of the players got a Sword of Shiva (+3 sword, whirlwind like a djinni 1/day). Also gotten were a tin of mustache wax and a WWI German army helmet.

The players in that game completed Sailors on the Starless Sea (good times!) and my game store game will be resuming in about a week, and we will be converting their existing OD&Dish characters to DCC. I'm looking forward to getting back into a regular gaming schedule again, and I've got a few new players so that's double-awesome!

Which brings up a side issue... I'm not certain at this point when or if I'm going to resume running games on G+. I've got a game store game every other week, and a monthly game at my house now. For a gainfully employed father of two, that's kind of a full load. Plus, since the arrival of our new daughter, I lost my office so it could be converted into a kid's bedroom, so getting a semi-private spot in the house with some peace and quiet has proven challenging. Hopefully the opportunity will arise where I can run or play in the occasional one-off game, but I guess only time will tell if that's in the cards.

Even still, I consider myself a diehard FLAILSNAILS adherent, so if you were to show up to one of my games at Unique Gifts & Games with some sort of AD&D/Labyrinth Lord/whatever type of PC, I'd be happy to let him or her get killed in my game join in on the fun.

P.S. - Thanks to Jeff Rients for his suggestions with regard to converting the dwarf and the halfling into non-racial classes (and everyone else I stole ideas from).

I've been kind of surprised that I've seen very little talk of these books since their Tuesday release. Perhaps I've simply been too sequestered over on G+. At any rate, I just got mine yesterday, and here are my thoughts:
Conclusion: If you are looking for books to actually play with, and have the patience to search on eBay, used book stores, etc., I'd highly recommend going with an original set. I think the originals are more durable and more legible. On the other hand, if you have the disposable income, and want to tell WotC that you think it's cool that they are printing older material, don't be afraid to buy a set of these. These books are perfectly serviceable, and my nitpicks are only things that a true OCD nerd (like myself) would even notice, much less find objectionable. I haven't scoured these with a fine-tooth comb, but as far as I can tell, the text and layout is true to the original, insofar as if you had to look up a spell, for example, you would find it on the same page in the same location in both versions. In terms of the identity crisis I mentioned earlier, I'm glad they erred on the side of keeping the books reasonably priced. If I were to start an AD&D game tomorrow, I'd have no qualms about recommending players who didn't want to fiddle with eBay to get a copy of this reprinted PHB for use in the game.

BUT WHERE'S THE PHOTOS?!?!?!
I thought I would take some photos of my books, but I found that Tim Brannan has taken some excellent photos of his, and did a far better job than I could have done with my crappy camera on my phone. (I also stand in awe of his beautiful set of originals.) Go check out what he has to say on the matter.