For Skullfuck Mountain (hereafter SFMTN), I'm using the Dying Earth Spells for D&D supplement. A magic-user's beginning spells are determined by rolling for them per the guidelines in the document: 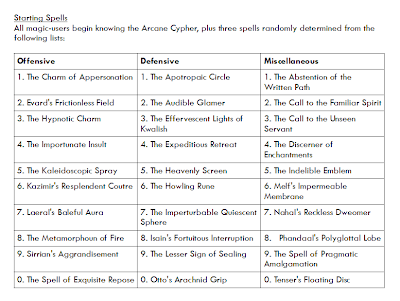 So basically they begin play with read magic (which is the only 0-level spell in the supplement) plus three randomly determined 1st-level spells.

The magic-user has access to all spells known, but is limited in spells castable per adventure by the charts in the Holmes rulebook (and I guess for beyond level 3, I'll just use the charts for the wizard from the d20 SRD, since Men & Magic already has a discrepancy at 3rd level, and that bothers my OCD side).

Interesting that I'm using Dying Earth spells and not requiring memorization, isn't it? Do you see the irony? DO YOU!?!?!

So now the question becomes "How does the wizard advance the number of spells he knows?" Well, I figure all additional spells will be gained by learning them from scrolls or spellbooks found while adventuring. I've put together a pretty basic procedure for attempting to add a found spell to the collection of spells known. It is loosely built around Holmes' scroll creation rules, but I figure the time component will just always be one week. We generally assume one week of time passes between dungeon expeditions, so the magic-user will get one roll between each session of play. They can opt to wait additional weeks if they want, I guess, which reminds me, I need to make an events chart of stuff that happens in the dungeon and surrounding areas to make downtime matter. One event per week seems like too much, so maybe a 1 in 4 chance of an event each week, which would make things roughly monthly. Anyways, I digress. Here is the procedure for learning new spells:

As far as limiting spells known, Holmes already has a chart for that, and if I find that too restrictive I could just use INT score as the maximum spells per level a magic-user may know.

Another thing I'm thinking about, but haven't quite figured out yet, is corruption. After playing DCC, I don't know if I could ever play without corrupting magic again. Just an idea off the top of my head that will require further thought:

Then there's the cleric. Not sure what to do about clerics yet, but we currently don't have any, so I don't think I'll bother spending much brain bandwidth on that until we actually get one.

Assuming the PCs made it back to town at the end of their previous adventure (and woe to them if they didn't!) each PC may attempt to gain a rumor concerning the dungeon at the beginning of a session by making a charisma check. The veracity of any of these claims is questionable, of course.

My personal image of berserkers will be forever be influenced by the ones +Evan Elkins killed one of my characters with in his Nightwick Abbey. I was one-shotted by one of these guys. They were wearing human skin skullcaps, and I think their "leather" armor was made of human skin as well. I learned that just because you're on level 1, charging in like a dummy is still charging in like a dummy.

Basically, berserkers are men who have been supernaturally corrupted by hanging out in the underworld way too long. They have become bloodthirsty leatherface-type guys who cannot speak or do much of anything except kill. Bright light, such as a torch or lantern held to the face, will usually stun them for a round if they can't make a save against stoning.

WHAT ARE THESE BERSERKERS YOU JUST STUMBLED ACROSS DOING? (if surprised)

WHAT DO THE BERSERKERS WEAR?
WHAT DO THEY WIELD?
WHAT HAPPENS IF THEY CRIT (19-20)?
Roll two exploding damage dice (d8s)

WHAT KINDS OF INCIDENTAL TREASURE CAN BE FOUND ON A BERSERKER? 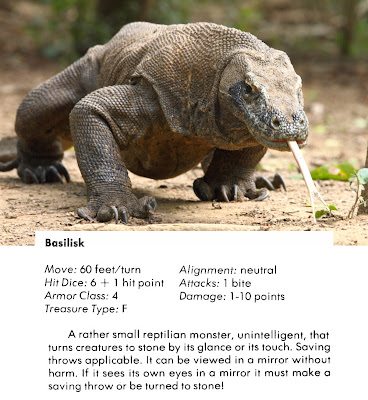 This thing seems pretty nondescript. None of that stuff about six legs and what have you. It's nice that we have both a bite and a gaze to utilize here, since normally what happens in my experience is that it's figured out (six legs is a big red flag), gazes are averted, and the monster is handily defeated.

Within The Underworld, there is large hall with neatly lined up statues around the circumference. Anyone making more than a cursory glance will notice that the poses are all peculiar, sort of like candid photographs, not like the stately or action-oriented poses one would normally expect. 1-3 large lumbering lizards tend to come investigate the sent of live meat, tongues flicking all about. (I interpret "rather small reptilian monster" to be in comparison to a dragon.)

When it's all said and done, any newly-minted statues will be neatly arranged near the outside walls by some unknown denizen(s) of the dungeon with a penchant for neatness and order.

One of the neat things about Holmes Basic D&D is that it barely has any illustrations. We have nothing but the text to go on, so we get to exercise our imagination a bit (or perhaps our googling skills), and take some liberties.

As an exercise, I'm going to attempt to go through each Holmes monster entry, and find a picture or illustration to accompany it. I'll add some additional stream-of-consciousness notes wherever possible as well. It's really just a brainstorming exercise to help give my Skullfuck Mountain game a simplistic sort of depth, but hopefully you will find it entertaining as well.

So without further ado, I present you with our first specimen - the Bandit. 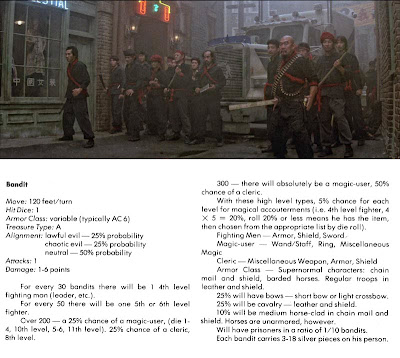 Bandits are usually encountered in smallish groups that work together to relieve passersby of any valuables they may be carrying. They are not true warriors, so they will generally only attack when they can stage an ambush and gain surprise.

These bandits you just encountered are (50% chance of each):


In both cases, there is an 80% chance that one of the bandits will have a sixgun loaded with 3-6 bullets. This guy will attempt to stay hidden until the second round of combat, at which point he will emerge and begin firing (from behind cover if available) 2 shots per round, first at any wizards he can identify, and secondly at any fighter types.

Sixgun Mechanics
All shots are fired as if against leather armor.
The first shot fired always causes an immediate wandering monster check.
Hits on enemies 3 HD and up cause 1d6+1 damage.
For hits on enemies less than 3 HD, roll the hit location die (or just a regular d12) to determine effect.

In a far-off land there is a small lake. On the lake's south end, there is a small village that has a cozy inn, a few shops, and a well-regarded brothel. On the north end is a giant fucking skull-shaped mountain reputed to have monsters and treasures in it. What would you like to do?

Last Saturday my home D&D group of friends met up in my back porch to play. It had been over a month since we played, and I was hemming and hawing about whether we should continue our Gamma World game, or the DCC-based Demonland game we played last time we met. So I did what any good ADD-afflicted DM would do - I started a brand new game!

I've been drawing some modular maps in the style of Stonehell Dungeon, or the One-Page Dungeon if you prefer. The only difference is that I did mine 20x20 instead of 30x30, just as a matter of personal preference. I'd also been daydreaming about a Castle Greyskull/Gamma World-based megadungeon for a while, and the kicker was when I stumbled upon this old thread about the UK version of Holmes Basic. I found the artwork to be very inspiring, and it prompted me to break out my Holmes book and give it another gander. So I cobbled all these ideas together, keyed a few of the maps I made, and grabbed a few unused or lightly-used things from my regular Outland campaign that's been going strong for a while now. I linked everything together so I had levels for the eyes, nose, and mouth, and some extra stuff in case something crazy happened. The end result was maybe 10 sheets of notes and maps, roll up some ultra-shitty Holmes PCs, and off to adventure!

It turned out to be quite a fun adventure. The dwarf fighter rolled 1 hp, so right away the thief kept trying to gank him and lost two characters trying. That fighter ended up being one of two survivors, and was able to make 2nd level after carousing. He then proceeded to roll an 8 for his next hit die. Pretty sweet if you ask me. That is the stuff of legend. There was judicious use of the mule for cover, and the super-deadly 2d8 Holmes firebombs. I typed up the house rules we used on the Smith Corona XE 6000 my mom dug up and gave to me after the game, and that was a fun exercise in itself. I really dig the finality of it all when using a typewriter (my correction ribbon is expired). The typewriter itself probably post-dates Holmes by 8 years or so, but who cares. Old and crappy is old and crappy, right? Anyways, I think this things has legs, so we'll be playing this again next time.* 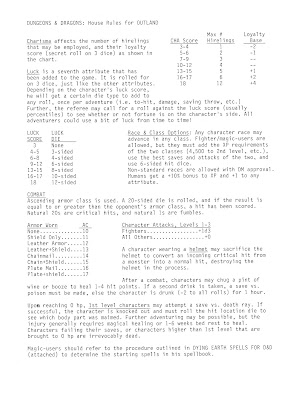 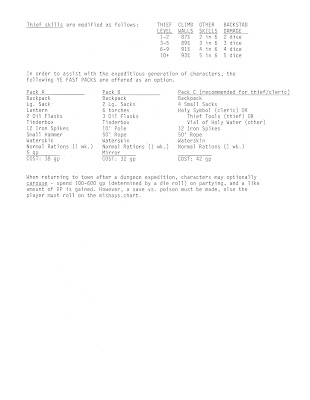 P.S. - I finally got an excuse to use the magnificent Dying Earth Spells for D&D, so that's a big plus as well!

P.P.S. - This is totally ConstantCon/FLAILSNAILS-able, and I think these guys could use some competition.

* Unless I get struck by another bout of ADD 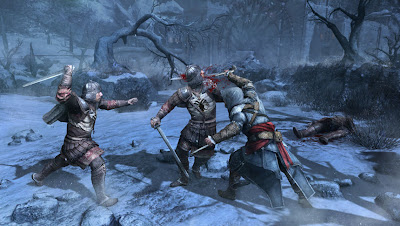