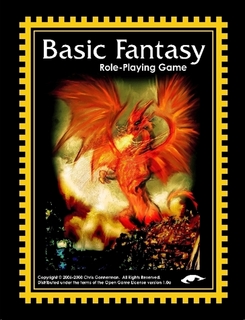 Basic Fantasy RPG is a really neat project that stems from the early days of what we've come to call the OSR. If I'm not mistaken, Chris Gonnerman originally created the game because he wanted something to use to play RPGs with his young daughter, and he wanted to share his efforts with the community at large.

Basic Fantasy RPG is the very first clone/simulacrum that I ever played. Here are a handful of things that I really dig about it:

Updates/Modernizations to the 1981 Basic Rules - While the game is clearly an adaptation of the 1981 Basic D&D Rules, edited by Tom Moldvay, it has been updated with a few of the things that I would tend to houserule in anyways. Ascending armor class and base attack bonus are used instead of descending AC and charts. Race and class are two separate things. The book also supports advancement up to 20th level.

Its Freeness - The game is free to download in PDF (with art included!) and OpenDocument formats. You can also get hard copies from Lulu in hardcover, perfectbound, or spiral bound at cost. The author doesn't take a cut. You just pay the cost to get it printed and shipped! While I try not to begrudge anyone looking to self-publish their gaming materials and make a few coins, I really respect Chris Gonnerman's choice to go this route.

Its Openness and Hackability - This is truly a hobbyist game. A lot of people I interact with choose a game because it is a good base on which to build. The game is offered in the form of OpenDocument files, with all art and formatting in place, so you can customize it to your heart's desire. You just have to download the fonts that the document uses (Soutane and Friz Quadrata BT), or change the font to something else if you prefer. This is something that I'm unaware of anyone else offering. Sure, you can get a free word document of Labyrinth Lord, but all the formatting is jacked up so you could spend hours just messing with that.

The first 53 pages contain all the player-oriented content, so it is very easy to do some tweaking and create customized "Player's Handbooks" for your game.

Its Completeness - The single volume has pretty much anything you'd ever need. A comprehensive equipment list, full combat rules (including stuff like wrestling, cover/concealment, oil, subdual damage, morale, energy drain), siege weapons and rules, full spell lists, a respectable monster listing, random encounter tables, a full listing of traditional treasures, GM advice, guidelines for creating dungeon and wilderness adventures, and so forth. If one was so inclined, they could literally play years' worth of adventures with just this single book. It makes a great introductory game system as well.

As a side note, this is a great system to choose for play-by-post games, if you are into that. You needn't worry about anyone lacking access to the rules, since they are free online, and you can utilize the BFRPG-specific online character sheet offered at charactersheet.net as well.

The game is also a great option for playing the old D&D adventures, recently brought back to life on dndclassics.com!

Email ThisBlogThis!Share to TwitterShare to FacebookShare to Pinterest
Labels: BFRPG

What the heck is this?

Since the cat is out of the bag, I can now release my Mole-Man Class that I did for Secret Santicore 2012! 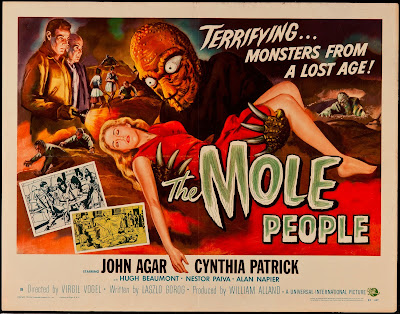 I got to watch this movie as "research". It didn't really yield anything useful, but it was a fine film!

I hope somebody likes it!