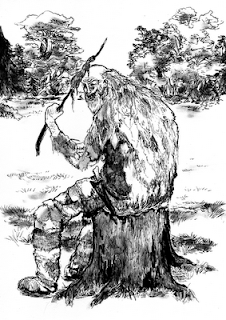 Sessions  6 and 7 of our Pathfinder game happened on May 14th and 21st, respectively. As alluded to in a previous post, I have shifted my approach to running this game dramatically. The campaign started out with book 1 of the Rise of the Runelords adventure path, but I've set that content aside in favor of a more open-ended, player-driven, sandboxy style.

First, I have to give a lot of credit to Paizo. Sandpoint is an excellent little town with enough going on in it to keep the players engaged at all times. Here is one of the 50 entries for the town, contained in the adventure path book:

8. Sage
The sole occupant of this ancient building is a cantankerous old man named Brodert Quink (NG male human expert 7), a balding expert on Varisian history and engineering. Brodert claims to have spent two decades of his youth studying with dwarven engineers at Janderhoff and three decades as a cataloger at the Great Library of Magnimar, and is continually baffled and enraged that his learning and obvious intelligence haven’t afforded him more prestige. Brodert has been studying ancient Thassilonian ruins for the past several years and has  recently become obsessed with the Old Light. No one believes his theories that the tower was once a war machine capable of spewing fire to a range of more than a mile.

There are some much more flavorful entries, such as the one for the Pixie's Kitten brothel, but this one is a good example of how the seeds of adventure are sprinkled throughout the town. Having already played 5 sessions, the group was already familiar with a number of NPCs, and a number of events had already taken place that were easy to build upon.

So basically, these two sessions added up to about 15 hours of play. As far as prep, I did very little. I created two encounter tables - one for the surrounding wilderness, and one for dungeons. One of the encounters I put on the table was "rival adventuring party", so I statted those up. I grabbed a few dungeon maps from Paratime Designs and tossed them into my binder, but I didn't even bother populating them, and probably won't until I know for sure where the party is going. I wrote down a short list of things that were happening around the town, some interesting, some not so much. I did do a great deal of thinking about the game in the two weeks leading up to it, but I wrote very little down, and to be perfectly honest, I was pretty scared about how it was going to turn out.

One thing I did do was read a lot of fiction during the time I'm normally spending reading the next adventure path book. I can't stress enough how well this paid off in play. I had just finished reading a REH book of stories, and I have been reading the Clark Ashton Smith book you see pictured over to the right. When we got down to playing, I was astounded at my ability to give vivid descriptions of events and roleplay a wide variety of NPCs. I am not an imaginative person - at least I've never fancied myself as being so. Yet, all the reading I had been doing awakened a long-dormant part of my brain, and contributed to what turned out to be some really great gaming.

I usually put in a metric shit ton of prep time whenever we play this game, so this was all like a wonderful brand-new world for me. I no longer had a personal investment in steering the party in a certain direction, and was able to achieve a level of indifference and impartiality previously unknown to me. As an added benefit, the levels of anxiety and stress I normally experience when actively running a game were lowered almost to the point of non-existence. It was like I had reached a state of Dungeon Master zen. In a word, it was fucking awesome!

This is definitely the lazy man's way to play, and furthermore, it was a lot more fun for me as well. This was because I had just as little idea what was going to happen in the game as the players did, and I was very interested in seeing how it all played out.

One unexpected thing that happened is the roleplaying went WAY up. There were only two combats across these two sessions, with the second session lasting 10 hours and being completely devoid of combat. What can I say? There were eight random encounter checks with an encounter happening on a 1 or 2, and it just never came up. I don't think anyone minded though, with the notable exception of our powergamer half-ogre barbarian. He was just squirming and itching to roll that d20 the whole time. Oh well, he will get his chance soon enough.

So right now, the party has explored the first few rooms of the shrine from Death Frost Doom, in search of a powerful sword they learned about from the local fortune-teller. They've had about a million hints that going there would be a bad idea, and still they press on. The barbarian even walked a mile with Zeke Duncaster hanging on his back screaming, "NO NO NO! YOU'RE ALL DOOOOOMED!" I read the adventure several weeks ago, so I was a little foggy on some of the details, but I didn't find it difficult to run at all by simply glancing at it while we were playing. Now that I know they intend to see things through in there, I can read the rest of it over again before the next time we play.

In addition, the party has been short on cash, so they have already exchanged three future favors for goods and services. Between those future favors being called in, and all the stuff happening in Sandpoint they don't even know about, this party won't be found "wondering what to do next" for some time.