The Book of Vile Darkness 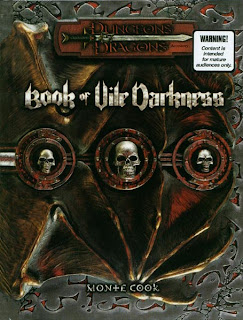 As time goes on, I get more and more comfortable taking stuff from any version of D&D (except 4th) and using it in my games. Back on Free RPG Day, I bought Monte Cook's 3E Book of Vile Darkness from one of my local game stores. I imagine it must have been quite popular at the time it was released (I wasn't playing then), because it's damn good. There are a ton of great ideas in here to kick the creepy factor up a notch. Here is one example:

Demonic Graft Machine: This machine is a mass of metal tubes, gears, arms, and wheels that turn and move silently. At the front of this machine, a wide iron plate fashioned into the form of a hideous face grins with a wide, open mouth. Through the mouth, the innards of the device are visible. The device is part machine and part demon, infused with fiendish essence and powered by evil magic. It is used to graft demonic additions onto the bodies of willing or unwilling victims.
Anyone that comes within 5 feet of the open mouth must succeed at a Reflex save (DC 15) or be grabbed by a tonguelike appendage and dragged into the machine.
Within the bowels of the machine, the victim’s body is sliced, burned, punctured, and torn. These operations deal 6d6 points of damage to the victim in 1 round. In the next round (if the character is still alive), demonic flesh and essence is added to the victim’s body, restoring 5d6 points of damage. On the third round, the character is spit out with a new demonic addition in place (roll on the following table).

d%: Demonic Addition
01–25 Left arm. The arm is long and flexible like a tendril, with a crude, three-fingered claw at the end. It functions as a natural weapon dealing 1d4 points of damage plus the character’s Strength bonus. Weapons used in the hand take a –2 penalty on attacks. Once per day, the arm can produce magic missile as the spell from a 5th-level caster.

26–55 Right arm. The arm is muscular and sinewy, with a clawed hand. The arm confers a +2 inherent bonus to Strength. As a natural weapon, the arm deals 1d6 points of damage plus the character’s Strength bonus.

56–70 Thick and muscular legs. The character gains a +2 bonus to his Constitution score.

71–85 Slim and agile legs. This addition increases the character’s speed by 10 feet when not wearing heavy armor or carrying a heavy load. The character gains a +5 competence bonus on Climb and Jump checks.

86–100 Familiar. Grafted onto the shoulder, back, stomach or hand, a demonic familiar is a small face with an evil expression. This face has Intelligence 12, Wisdom 9, and Charisma 6. If the character is a wizard, the face can teach him one new spell for every spell level he knows. If the character is a spellcaster, the familiar povides a +2 inherent bonus to the ability score that determines his bonus spells.

Now, this thing is obviously loaded with 3E mechanics, but the underlying idea is very simple to convert to any edition you happen to be playing.

Personally, I love giving PCs power that is clearly tainted with evil or some negative side effect, and seeing how they proceed. I also love mutating the shit out of them, so something like this is right up my alley. Currently, I have a half-elf cleric covered in hair from head to toe, a half-ogre barbarian with goat legs, and a female goblin with a moustache in my campaign (Thank you Dave Hargrave for your Whimsy Wine idea!).

But this thing is really cool. A trap spits out the victim with demonic modifications? I can almost guarantee that once the first PC comes out of this thing, the others are going to want to line up to go in voluntarily. I think I'll have to rule that the thing broke after one person goes through it.