So my brother-in-law decided he wanted to run a drow noble campaign, using Pathfinder rules, and allowing everything on the Pathfinder SRD site. I'm thinking, this is crazy! He had us roll stats three different ways: 3d6, reroll 1s; 4d6 drop lowest; and d12+6. Then we could pick whichever set we liked the best and arrange to taste.

Dex being the best, I went for a Dex-based class. Rogue seemed kind of lame, but I found a new class from the new Ultimate Combat book - THE NINJA! This class is totally broken. At level 2, I can already turn invisible as a swift action (meaning I can still move and attack in the same round). It's totally fucked. We played one session, and let me be honest, it was fun as shit. We're all supposed to be brothers/sisters from the same family, and we just came of age (86 years old) and are going to be sent to the drow school for learning devious shit. So for our first session, we did some trials. One was to pick a mushroom from a set of four and hopefully not die or get fucked up. I'm not sure what we were supposed to figure out, besides just guessing. Anyways, I got a crazy-ass bluff score so I faked eating the mushroom. I rolled shitty, so it didn't work, but I followed up with a use of my 1/day suggestion spell, to convince the test's administrator that I had in fact eaten the mushroom. At least that worked. I later found out the mushroom I picked was some crazy hallucinogenic kind, so later that night all our PCs split it and ate it, and promptly proceeded into the dungeons of our own house to pull monsters out of the cells and kill them for sport, while tripping.

I laughed my balls of the entire session, and was in tears once or twice. We decided to be the Black family. We have Joe Black (me), Jack Black, Frank Black, and I forget what my sister's was. I think next session, we will actually be going to the school. I expect lots of amazing fun, sort of like if completely immature superheroes were to attend whatever school Harry Potter went to.

Now for your pleasure, here is my completely overpowered level 2 character: 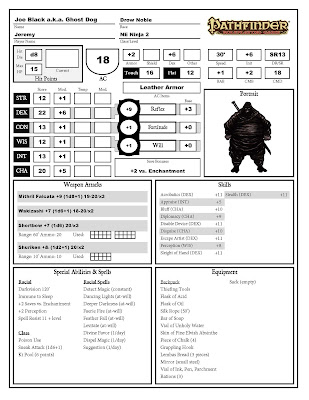 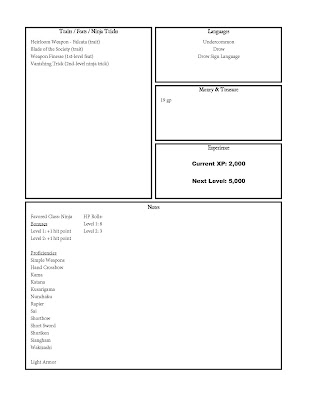