Here is my first draft of B/X-ish sorcery, which is being introduced not as a new class, but as an alternate magic system that standard magic-users can opt into.

Outland Sorcery
At any time, a magic-user may choose to abandon the traditional study of magic and pursue the dark sorceries that are so prevalent in Outland. This decision is permanent, and gives the sorcerer the following benefits and limitations.
Spells no longer need to be memorized. A sorcerer can cast any spell he knows at any time, but he must make a spell check to do so (roll 2d6). The effects will depend on the result of the check. Thus, the sorcerer is sacrificing the reliability of the traditional magic-user for the flexibility of sorcery.

If the result on the table indicates an F, the spell is lost and cannot be cast again until the following day after the sorcerer has rested.

D indicates that the result of the spell is delayed, and will not take effect until the following round. If the caster is hit by a missile or engaged in melee before the spell goes off, the spell is treated as a failure.

An I indicates that the spell goes off immediately.

A result of 12 is a critical success, and the spell will have an increased effect, as determined by the referee. 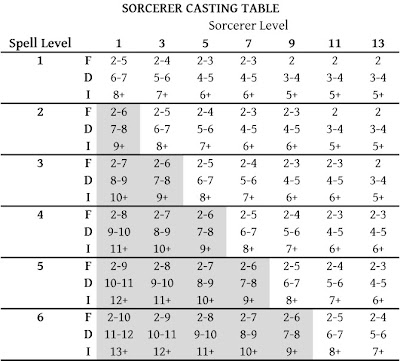 To give credit where credit is due, this is influenced by Chainmail, the excellent work of Jason Vey in his Age of Conan and Forbidden Lore OD&D supplements, and the Dungeon Crawl Classics RPG.

I would also like to have rules for sacrificing money/animals/people to get bonuses to spell checks (I really like Jason's rules for this, as outlined in his Secrets of Acheron supplement IIRC). I think a Summon Monster ability would be a nice touch as well. Actually, there are a million things I'd like to add, but I'm trying to keep it small enough to fit on a single digest-sized page, so I have to decide what's really important. I suppose I could always add complexity in the game through tomes or magic items, which is a strategy I've become quite fond of lately.

Anyways, I'm curious to know if anyone has any thoughts on the matter - good, bad, or indifferent.