A few weeks back, I ran a sort of experiment. I wanted to run a level 1 Pathfinder adventure with level 0 DCC characters. I already had some copies of the free DCC RPG Beta Rules printed up, and I had picked up this free goblin adventure on Free RPG Day.

In order to make it a little more meaningful, I told the players they could each roll up 4 level 0 goblin dudes, and any survivors could become level 1 henchmen of their main characters in our Pathfinder/DCC frankenstein game that has been running for almost a year now. It was easy to fit this in plotwise with our ongoing campaign.

The adventure was a ton of fun. The module needs a little bit of adjustment to run for DCC, but I did it all on the fly without any problem.

The dares were especially fun, and since level 0 DCC characters don't get hardly jack for items, it is very worthwhile for the players to try. I think I killed like 5 PCs from the dares alone.

Here were the most memorable:

The very first dare, "Dance with Squealy Nord", where a character has to ride a piglet rodeo-style for three rounds (3 successful Agility checks, roll equal to or under Agility score on a d20). First roll was a fail, and the PC fell off the pig and died.

Hide or Get Clubbed: This is the goblin version of hide and seek. The dare-taker rushes off into the marsh without any weapons and attempts to find a good hiding spot (I allowed the PCs to make two checks - d20+agi mod and d20+int mod and take the better result for their hide check). The other goblins try to find him, and if they do, the finder is allowed to whack the previously hidden goblin with a club. Once the goblins start looking, roll 1d10 to determine how many goblins come close enough to the hiding goblin to attempt –1 Perception checks to notice the hiding goblin. (Rolled a 10 and the first one found him.) If a goblin finds the hidden goblin, the resulting club strike automatically inflicts 1d4–1 points of damage. (BAM! DEAD! HAHAHAHHAA!) If no goblins find the hidden goblin, he wins a loan of the mystical Ring That Lets You Climb Real Good (a ring of  climbing). 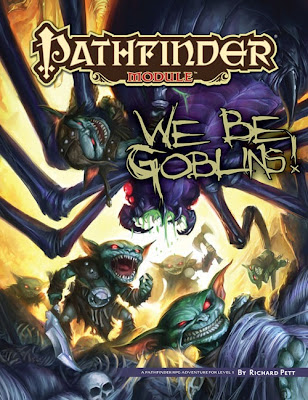 After the dares, there's just one encounter on the way to the target. (Note that the adventure references the Pathfinder Bestiary, but you can get the needed stat blocks for free at d20pfsrd.com if you don't have the actual book.) This is a relatively straightforward encounter against a big spider. Probably one or two guys will die depending on initiative. I made certain to explain the obvious trail back to the spider's lair after the fight so the PCs could pick up a few more mundane weapons.

Then, the final part, which really needs to be toned down unless you don't care about having a TPK. There is a wasp swarm trap, which the PCs will find impossible to kill off once triggered using Pathfinder swarm rules, since they are immune to normal weapon damage. Additionally, the druid at the end can summon a swarm (and she should!), which can be very deadly, potentially killing up to 4 PCs per round, but that one only lasts 2 rounds.

By the end, only 2 PCs remained from the 16 we had at the beginning. One of the players took a body part from one of his deceased 0-level dudes that he was particularly fond of, in order to have his main character get him resurrected someday. (Awww, how sweet.)

In summation, this session was a big hit with the players, and we spent most of the session laughing our asses off, which is how it should be. I highly recommend trying this combo, as the silliness of DCC 0-level play and this particular adventure complemented each other perfectly.