Oh DCC, You So Crazy! 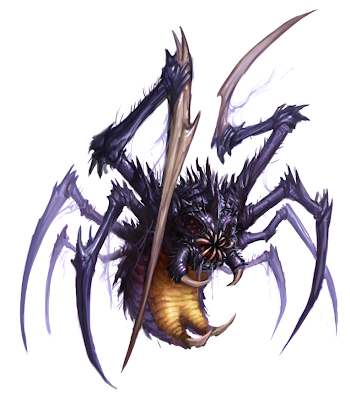 So guess who wins in this fight:

Side B:
A Motherfucking Pathfinder BEBILITH*

I put this monster in a dead-end in the dungeon, sort of like an optional thing that would likely take one or two guys out, become some sort of challenge to get the bodies out so they could hopefully be revived in time, and teach the players a lesson about attacking everything they find. Sure, I knew that if they really put their minds to it, they could defeat this guy, but I honestly didn't expect them to go through the trouble. Little did I know that the cleric would cast bless right before the room this monster lives in so they could have an easier time getting across the 15' chasm they had to cross, and get a high spell check that resulted in everyone getting a +9 to all their rolls for one turn. They knew that something horrible was in there since the door was basically in shreds already, but they wanted to take advantage of the opportunity, so they rushed right in and threw something (a rock I think) down the sinkhole into the abyssal cavern below where the thing lives. Up it comes, and the cleric readies his "Bolt from the Blue" (or whatever it's called) spell. He gets some crazy-ass roll and lights the fucker up with 6d12 damage right off the bat. The warrior gets a minor shot in, and the 1st-level halfling, not feeling very sure of himself, tosses a grub that he had found earlier and carefully collected in a flask (a rot grub, but the players didn't know). I secretly rolled a d4 to see how long it would take the rot grub to penetrate the monster and start jacking it up - 2 rounds. Then the bebilith gets its turn, and hits with all 3 attacks on the halfling. Just the damage from the bite was enough to take him down, plus he's afflicted with a terrible bebilith rot. New round, players win initiative. Cleric uses his big action die for another Bolt from the Blue, figuring the +9 will be good enough to allow him to safely use his smaller d14 action die for healing the halfling and preventing death in the one-round grace period the DCC rules offer a 1st-level PC. He makes another crazy roll and scores another 6d12 damage on the monster, causing a (what should be very easy) morale check. The monster fails the morale check and begins to retreat down into its hole. I give the two standing party members free parting shots, both of which amazingly hit the AC 22 beast. It has 2 hp at this point. The cleric heals up the halfling, and follows that up with neutralize disease/poison to get rid of the rot. Guess what happens next. The rot grub finds its mark, and the rest is history.

Un-fucking-believable! This monster is supposed to challenge four 10th-level Pathfinder PCs, and these three DCC scrubs kicked the shit out of it. It could have ended very differently of course, with the ground being covered with tears and broken sets of magical armor, but it didn't. It was awesome.

*I ran the monster with only two minor changes - I capped the attack bonus at +10, and treated its DR10/Good as DR10/Magic, since there are no good-aligned weapons in my game. It didn't matter anyways, since every attack it actually made landed, but I figured full disclosure was in order.