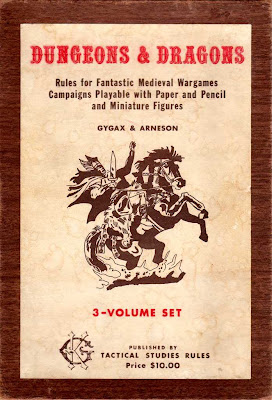 I still rather enjoy playing Original D&D circa 1974 from time to time. The leanness of the mechanics leaves a lot of brain bandwidth for me to get more creative on the adventure/setting side of things (and of course plenty of tinkering with mechanics as well, but I always strive to keep things simple). I think more than any other incarnation of D&D, LBB D&D is about creativity rather than strict adherence to a bunch of codified procedures. In short, it provides a very unique and satisfying gaming experience. Here you will find some of the house rules I use, and notes about how I tend to adjudicate things in play. Of course these things change so often, I often wonder if there is even any value in documenting such things, so take it all with a grain of salt.

DEX as Armor: Characters who elect to wear no armor may use their DEX score as their AC.

Initiative: Have a player roll a d12
1-2: Players surprised. Monsters get a free round of actions
3-6: No surprise. Monsters act, then players.
7-10: No surprise. Players act, then monsters.
11-12: Monsters surprised. Players get a free round of actions.
Surprise is only possible at the beginning of an encounter when circumstances allow for the possibility.
The reason a d12 is used instead of a d6 is so if there is a specific PC or monster that has a lessened chance of surprise, you can still allow them to act on a 2 or 11, while everyone else is surprised.

Stunts: I'm still kind of experimenting with this idea which is stolen from DCC, but if a player declares a stunt I have them roll a die along with their normal attack roll. The die must come up 4+ and the attack roll must hit in order for the stunt to be successful, in which case the player can choose to get double damage, or regular damage plus some effect like a knockdown or blinding shot. Note that the extra die result is not added to attack or damage rolls; it is merely used to check for success of the stunt.
Fighters roll a d8. Priests roll a d6. Wizards roll a d4.
I wanted to try out a fancy thing where instead of an attack bonus, fighters start out rolling d16+d8 for attacks, priests roll d16+d6, and wizards roll d16+d4. At higher levels the d16 would be replaced with a d20, and possibly even a d24 at the really high levels. This introduced some concerns about how to figure out when a crit is scored, and other wonky effects. Turns out that two of my three d16's are missing, and I don't feel like buying more at the moment, so that experiment will have to sit on the back burner for the time being.

Spell Casting: Spells are declared before initiative is rolled, and the casting attempt is assumed to begin immediately at the beginning of the round. If the caster's side loses initiative, and the caster is hit before his turn comes up, the spell is lost. Even if the caster's side wins initiative, there is still a chance of interruption. He must roll to see if the spell goes off immediately or at the end of the round. Roll 2d6.
2. Spell fumble. Automatic failure and caster suffers corruption/mutation.
3-7. Delayed. Spell goes off at the end of the round, and is interrupted if the caster is hit before then.
8-11. Spell goes off immediately.
12. Spell critical. Increased effect per referee.
The caster gets a +1 bonus to the roll for each level below the maximum spell level the caster can cast. (i.e. a 5th level wizard gets a +2 bonus to the roll when casting 1st level spells.)

There is no thief class, but everyone has the basic skills necessary to attempt thiefish things like picking locks or disarming traps. The chance is 2:6 for the first two levels, 3:6 for the next three levels (3-5), 4:6 for the next four levels (6-9), and 5:6 for levels 10 and up.