This crazy-ass monster was first brought to my attention when I got a mini of it in a random pack. "What the fuck is this giant 4-legged chickadee?" I said to myself. 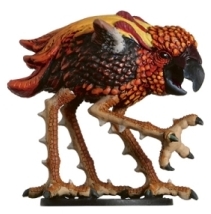 It has it's origins in the AD&D Fiend Folio (at least insofar as I can tell). It's actually a pretty neat monster.

It doesn't look very intimidating, but that black toxic cloud is pretty wicked. In the Bestiary 2, Paizo did a nice job sexing this monster up a bit: 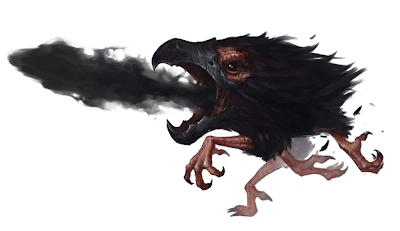 
An achaierai is a predator and scavenger of the lower planes that looks like a 15-foot-tall flightless bird, though its head and body are fused into one large unit, with four legs and atrophied wings. The thick, oily plumage covering its body all but conceals these tiny wings. An adult achaierai weighs roughly 750 pounds.

Though not devils themselves, achaierais live and hunt on the scorched and blasted plains of Hell, where they make excellent use of their long, stilt-like legs in running down any lost souls or lesser devils who stumble into their feeding grounds. Once it has closed with its target, an achaierai attacks with its two front legs, punching or slashing, as well as biting with its powerful beak. Far smarter than their animalistic form might suggest, achaierais prefer to hunt in shrieking packs and use their prey’s confusion and their own reach to their advantage, circling their quarry and darting in to attack as soon as the victim becomes distracted, then retreating again before the prey has a chance to retaliate. They have been known to wander through battlefields in the lower planes, picking over dying and regenerating creatures and souls, which has earned them the nickname “Hell’s vultures.” As achaierais are immune to the toxic clouds of others of their kind, they often work in conjunction to use these clouds to herd or scatter enemies, form long lines of black clouds to protect their retreat, or merely panic opponents in large melees. Achaierais are fond of disemboweling their targets and feasting on the hot entrails while their mortally wounded prey screams itself to death. Of course, as outsiders, achaierais have no need to eat, and their elaborate hunting routines are simply the bird-beasts’ sick form of entertainment.

Pretty fucking cool if you ask me. One of my campaigns has a lot of devils and hellish influence, and I was contemplating an eventual high-level mini-mega-dungeon that would feature a lot of jumping in and out of hell. This monster would do a nice job in such a situation, when the obvious monsters - devils - would become stale and things need to be mixed up a bit.
Got my A post in with 20 minutes to spare! :P

Email ThisBlogThis!Share to TwitterShare to FacebookShare to Pinterest
Labels: A to Z