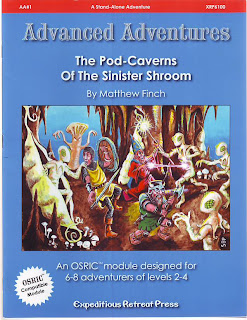 Just got home from Lake Geneva Games where I ran a slightly truncated version of Matt Finch's Pod-Caverns of the Sinister Shroom (great module by the way!) using the DCC RPG Beta rules. It was pretty much awesome, but I'll try to keep this short and sweet (and fail miserably at that as usual). Here are some points about the game, in no particular order.


Here were a few of the awesome moments from the game:
Other observations about the game:
In summation, this was a great session. I am lucky in that a had an awesome group of players, and this system is simply built for action-packed adventures. This was my first public game I've ever run, and I would do it again in a heartbeat. It was a very rewarding experience.
Please post any questions you have about the session or the game itself. I'd be happy to answer!
Hvaen't played DCC yet? Get off your ass and get to it!