I rarely create my own traps, since I have a crap imagination, but I made this one and I thought it was pretty cool and worked well in play, so here you go.

The setup: A mostly-empty 30x40 room with a door. When the door is opened, a single torch set in a sconce on the opposite wall lights up - as the players said, "like a refrigerator light." This is just a gimmick to draw attention to the thing.

The torch itself is obviously magical. It is an everburning torch that can be set to ignite/extinguish when certain conditions are met, similar to magic mouth.

What isn't so obvious, is that the sconce is also magical. It is styled to look like a hand holding the torch. Mine was made of stone, but it could be anything, really. Most notably, the ring finger bears a gold ring with a large gem set in it (say 1d6x1,000gp or so). Close inspection will also reveal a small nozzle sticking out under the hand. 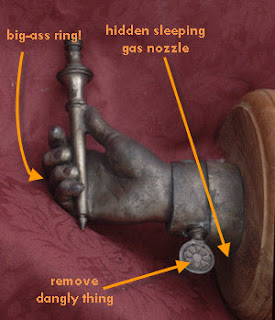 Directly beneath this thing is a 10x10 pit trap in the floor, which could be detected by anyone crouching down and examining the floor beneath the torch/sconce.

There should probably be one other thing somewhere in the room, well clear of the pit trap. This creates the possibility that the party will split up, with some messing with the torch/sconce, while the others mess with the other thing.

Here's how it works: The torch can be removed from the scone without issue, but in order to remove the valuable ring, the sconce would need to be damaged or broken. If the sconce is touched at all, even with an item like a 10' pole, the trap is triggered, and the following things happen:

Round 1: The nozzle sprays a powerful sleeping gas in a 10x10x10 cloud. Save or get knocked out.

Round 2: The pit trap opens, dropping 20' (2d6 falling damage) into a pit filled with 6 inches of your flammable liquid of choice. The liquid is not deep enough to reduce any of the falling damage, but it sure is strong-smelling! Any characters that didn't get knocked out by the gas can make another save to grab the edge of the pit before plummeting down into it. Characters that were knocked out will be awakened by the fall.

Round 3: The magical sconce-hand opens up, dropping the torch into the pit and igniting the fire juice. It burns real hot, so its probably going to cause about 2d8 damage per round, or somewhere thereabouts. Whatever the number, it should be scary. A character might be able to catch the torch as it's falling before it ignites the liquid, but I would not present them with this option. They would need to think of it on their own. Even then, I'd probably make it a hard DEX check (3d20s - ALL of them equal or under dex score).

Handle escape to be consistent with how you'd normally handle such a thing. Personally, I'd say a round to get a rope set, provided one is available along with a grappling hook, and then the rope could be climbed at a rate of 10' round. Once they are 10' up, they take only half of the flaming hot damage.

The oil in there will burn for several hours, probably requiring the group to return the following day if they need to retrieve any items that may have been dropped in there. For double the fun, have the trap reset!