Saturday night we were supposed to have our Pathfinder game which is being run by my brother-in-law, but we were short 2 of the 4 players, so he didn't really want to run it. As luck would have it, I had just gotten my back issues of Fight On #6 and #7 the previous night, and I had read Jeff Rients' excellent article, "Holy Crap! I Need a Dungeon RIGHT NOW!" (in issue #6). It was a very good article that gave some great and easy-to-remember guidelines for creating a decent dungeon in no time flat.

I purposely didn't bring hardly any of my stuff with me, even though I usually do as a "just in case" measure. So all I had was one sheet of graph paper, my copy of Vornheim, a notebook with a few tables I had done up previously, and Labyrinth Lord and my Zero-Level rules on my tablet.

So, I took the opportunity to whip up a quick haunted house with 3 levels, had each of the two players "roll up" 6 0-level noobs, and we had us a nice little adventure!

This was the closest thing to total improvisation I have ever done, and it went really well. I did take about 45 minutes to put everything together, but they only made it through about a third of the content in the several hours we played, so it's safe to say I overprepped. Both commented on how much fun they had, and I think the whole thing did a good job of showing how you can have lots of fun with very few rules or character details.

For combat, they just rolled a d6 for each PC they had, and they would hit on a 6 with a makeshift weapon, or hit on a 5+ with an actual weapon like a sword. They had one room where they "activated" 4 zombies and 5 skeletons, and we were able to manage the combat very quickly and easily this way. Plus, there's just something gratifying about rolling handfuls of dice. I've been spending a lot of time lately reading about how to use Chainmail rules for OD&D combats, and this session showed me that it is something I really ought to pursue.

Once I got into the flow of things, I found it really easy to add little details on the fly that brought the thing to life. Here are some of the highlights: 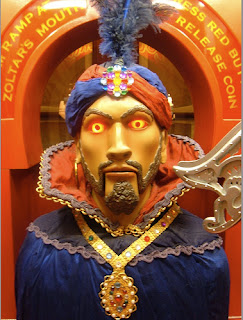 For your pleasure, here are my crappy maps and keys from the session: 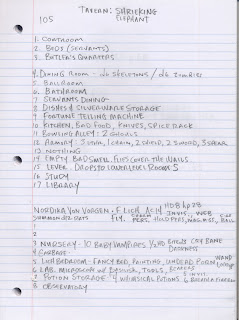 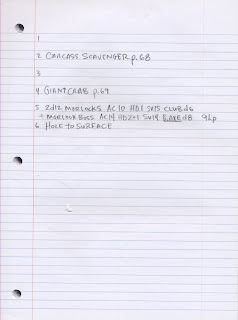