When I was in 5th or 6th grade, there was an awesome cartoon that was airing at 6:00AM on the weekdays called Conan the Adventurer. I got my ass up every day by 5:45 to watch it, and that in and of itself is a testament to how much I liked it, because I have always held sleep in very high regard.

I've recently been watching the series again with my 2-year-old daughter, and we've been having a blast. It holds up really well in my opinion. Every time an episode is reaching it's conclusion, she knows it before the credits and closing song even come up. Without fail she exclaims, "WATCH TOMAN AGAIN!" (She still has trouble making a K sound)

This was one of the few cartoons from my youth that I can still watch and fully enjoy today. I'm ashamed to admit I've never read any R.E.H. Conan stories, so I can't comment on how the two compare, but I plan to remedy that soon. The series is a true serial, with continuity between episodes, which was a lost art for a while, but has come back to us along with the advent of the DVR. The show uses artfully simple fantasy tropes, and the world as presented is thankfully very different from the Tolkienesque stuff that I am so burnt out on. Pretty much every episode provides me with a handful of ideas I would like to use in future adventures. Some examples of these nuggets are "serpent men that can only be defeated with weapons made of a rare alien metal that came from a meteor that fell from space" or "giant telepathic gorilla-man who's spaceship crashed and people worship him as a god, but he is really enslaved by an evil sorcerer that stole his magic rod after the crash." 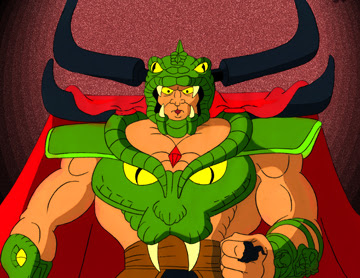 This is the kind of content that I love. Simple ideas that can be built upon to make for some cool games. If you've never seen this cartoon, or haven't seen it in 19 years like myself, I highly recommend checking it out.