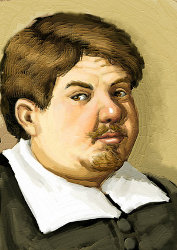 This is a character I made for my friend Steve's play-by-post Basic Fantasy RPG game. In that game, his stats are slightly different, and he is actually a cleric (long story), but I figured he had some potential as an NPC. Thus, I present you with Dennix the Duplicitous...

Dennix is a fat, slow, weak and lazy man, always looking to make some quick and easy coin. He is a moneychanger, working down by the docks. However, his business is about to fold because he spends all his nights gambling away any profits he makes in the seedy dockside gambling dens.


He also frequently tries to rip off foreigners visiting the city, and word of his misdeeds has spread far and wide. He is no stranger to black eyes. The locals refer to him as Dennix the Degenerate, Dennix the Deceitful, or Dennix the Duplicitous (and sometimes even just Dennix the Fat). He has been called countless other things as well.


He seems to have terrible luck, as is the case with most compulsive gamblers, and one night, even when he stood to win a large pot in the gambling halls from a gypsy, he still lost. The man did not have the cash to pay what he owed, and instead gave Dennix what he called a "Blink Dog's Tail". He told him it was magical and would allow Dennix to teleport short distances by rubbing it in a moment of need. Dennix has yet to get the thing to work, and only weeks later is coming to accept the fact that he was duped. Dennix is extremely worried about his future, and if he doesn't catch a break soon, he is going to be out on the streets, begging for his meals. For a man of his girth, that's a lot of begging...