I owe Jamesnardia* a debt of gratitude for his Pulp Fantasy Library series of posts (example). These posts were to be my introduction to fantasy fiction outside of my old comfort zone of Forgotten Realms novels, Robert Jordan, and the like. Until recently, I hadn't read for many years anyways, so I figured I may as well expand my horizons a bit. The numerous excerpts he posted from the stories are what really piqued my interest, and made me get up off my butt and check this stuff out.

The first one I chose was Swords and Deviltry by Fritz Leiber. I got the Ace paperback for $7 shipped on ebay, which seemed like a good deal. The book has 3 stories - The Snow Women, The Unholy Grail, and Ill Met in Lankhmar. From what I understand, these stories are far from Leiber's best work, but I figured I may as well start out chronologically, as these stories cover the origins of each character separately, and then the story of how they met. 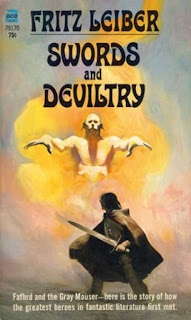 The Snow Women was far from the best story I've ever read, but it had some great elements, my favorite being the subtle way magic is featured in the story. It's presented in such a way that you don't even know if it really is magic, or if it's just the crazy superstitions of a backward people mixed with coincidental happenings. Prominently featured is an exotic bellydancer/mime/hooker that Fafhrd becomes so infatuated with that he decides to just up and leave his pregnant girlfriend. There are some pretty great stunts involved as this plays out.

The Unholy Grail takes a much different tone, and begins with a tragedy. This story was much darker and more enjoyable to read, with a great hate-worthy villian. My only complaint would be the use of deus ex machina in the end, but I can overlook that and still call it a good story.

Ill Met in Lankhmar is a proper conclusion to this book, and it is better than the first two stories combined. There is great atmosphere in this story, and an artful combination of a feeling of impending doom that hangs over the entire story in the background, while the actual things that are happening right in front of you are mostly light-hearted shenanigans of a couple of guys that like to do crimes and have a good time. I particularly loved the description of Mouser's apartment, basically a crappy run-down abandoned building that should be condemned, yet it was filled with luxurious items such as fancy rugs, furniture, and so forth. This really struck a chord with me, as I used to interface with a lot of unsavory types in my younger days, and this sort of thing was commonplace. A big fancy leather couch from Rent-A-Center stuffed into a crappy studio apartment, and the guy would ask for cigarettes because he had no money, and that sort of thing. The dark sorcery presented in this story was much less subtle and much more horrifying than what we experienced in The Snow Women, much to my delight. Again, there was some deus ex machina at the end, but it seemed less offensive to my sensibilities than that of the previous story.

From what I understand, the stories that follow these are the best ones. As luck would have it, while I was in the middle of reading this book, I found a hardcover copy of Ill Met in Lankhmar (the one published by White Wolf) in the basement, which includes the next book/volume/whatever - Swords Against Death - so I already have some more Leiber ready and waiting for me, and I consider myself a pretty lucky dude as a result! 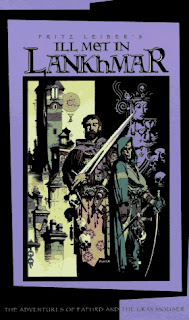 * Name stolen from Joesky the Dungeon Brawler, and I will likely be using it indefinitely.