This past Saturday, I was able to go check out the Classic D&D Marathon run by ChicagoWiz at Unique Gifts and Games in Grayslake, IL. He's already posted his own recap as well, and you can read that here:

The event was scheduled from 11AM-9PM. I got there at 11:05, and the table was already full and play was underway. No biggie though, since players were being rotated on the hour.

So the first hour I just got to watch, which was extremely helpful for me as a DM that is interested in running more old-school type games. He was clearly very comfortable with the game he was running, which seemed to be sort of a mashup of Original/Basic D&D and Swords & Wizardry. He kept things moving all the time, which I think is important when you are running a game for 7 players. 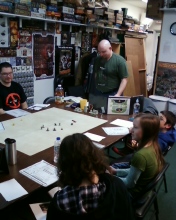 I liked to see how minis were used in an old-school game. In my group we always joke about how we used them in the 1e/2e era. "You set your mini down in front of you, point to it, and say, That's my guy." Mike used a big unmarked vinyl battlemat, put the monsters out for every combat, and had people arrange their minis to show how they formed their group in some combats, but that was about it. At one point, someone asked what the scale was. His response was, "There is no scale." Minis were not moved to reflect movement in combat, and there was no fiddling with determining cover or range or any of that stuff. 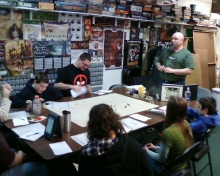 In the second hour, I got my turn to play, and I got the magic-user. This was pretty awesome, since I never get to play, and even when I do, I NEVER get to play the MU. My sister swipes it up every time, usually leaving me with a cleric. On top of all this, it was a level 4 MU, so he actually had a few spells. After gearing up in town and exchanging some gold for silver (the natives did not value gold, which was a nice touch), we headed out. It didn't take long before we found ourselves out in a wide-open field with a dragon circling overhead, and it was clear that he had seen us. I was at a bit of a loss as to what to do. The mini placed on the table to represent the dragon was less than intimidating, and perhaps that influenced my judgement. 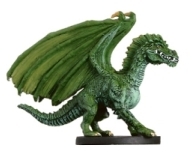 To make a long story short, I cast phantasmal force to create in image of the largest red dragon I could, in hopes of scaring him off. He saved to disbelieve the illusion, and killed 3 of us. Whoops!
So my 30 minutes of fame were up and I went back into the queue. By this time people started flooding the store - people from all walks of life, and lots of guys brought their young kids. You should have seen the smiles on these guys' faces. The place was buzzing. At one point, I counted 7 people playing and 13 people waiting to play. That's just awesome!
I was content to watch for a few more hours, and it was pretty fun to watch the party go out hunting with Ron the Hunter, who would always hide in the bushes for every combat, and them come back out after the fight to decapitate the beast in glorious fashion. Watching the group interact with the monkey people via pantomime was downright hilarious. Throughout the entire game, there was a lot of head-scratching going on by the players, which I consider to be a sign of a great D&D game.
I planned on staying the entire duration, but alas, I had gone to bed at 3AM the night before and woke up at 6AM , so I headed out at about 4PM to go home and nap. All in all I consider the event a great success, and I would love to see more D&D at that store.
Thanks Mike, for showing us all a great time. I know you put a lot of work into it, and based on the number of smiles in that store, I'd say your efforts paid off!
P.S. - Sorry for the crappy pictures. I guess when my cell phone starts getting full it shrinks the picture resolution :(