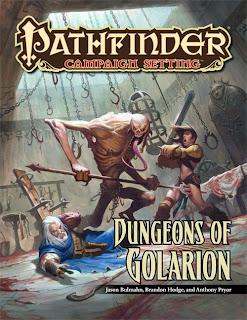 Paizo recently released a "megadungeon supplement" called Dungeons of Golarion, featuring six dungeon locations. It sounds like none of these dungeons are fully realized, with each containing a cutaway view of each complex, sample monsters, traps, and treasures, and a sample level.

This seems like a cool supplement, and I think I will be adding it to my next subscription shipment. I really like a lot of the Pathfinder campaign setting material. My favorite thing about the stuff is that it paints in broad strokes, and provides a good starting point for further development and customization by the GM. The City of Strangers supplement (probably my favorite campaign setting supplement) says it best:

This Is Not the End

The book you hold in your hand is undoubtedly the most thorough book on Kaer Maga that will ever be written. Representing several years of daydreaming, starting out as the background for a chapter in the Pathfinder’s Journal and evolving into much more, this guide contains countless NPCs, adventure hooks, guilds and gangs, monsters old and new, and cultures never seen before on the face of Golarion.

It’s also only the beginning.

There’s a common misconception that a game universe is limited by “canon,” that those people and things mentioned in a sourcebook represent the entirety of what exists in a given location. Yet it should be remembered that Kaer Maga, fictional or otherwise, is still a city—a living, breathing web of intrigue and interpersonal relationships, thousands of individuals living in conflict or harmony. Whether 64 pages or 640, no guidebook could hope to detail every secret, explain every background or motivation of the city’s residents, any more than a single book could explain New York, London, or Tokyo. Instead, this book is intended to paint Kaer Maga with broad strokes and then leave the rest to you as GM, having planted enough seeds for you to grow your own version of the Asylum Stone. For every fact given—the nature of the Sweettalkers, the process by which bloatmages use their blood to empower their magic, the secret history of the city beneath the city—the hope is that two new questions will be raised. For these questions are the stuff from which adventures are made and are where the GM’s real work—and fun—begins.

Thanks for visiting Kaer Maga—there’s room here for everyone. Especially you.

Campaign settings are for gaming, and I'm glad Paizo gets that.