About 15 minutes in, I was thinking it was pretty lame, but then it really picked up. I'm still on the fence about the style of the art. Lion-O looked particularly uninspired, but hopefully he will evolve into more of a badass over time. I'm definitely looking forward to the next episode. Hopefully it will be successful and they will consider doing the Silverhawks as well, but I don't think that show was nearly as popular. 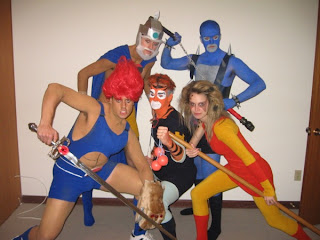 As a side note, Jim Ward told us an interesting little anecdote about how Gary Gygax had come up with the idea for a show which was pretty much the Thundercats, although I don't know if he called it that. Apparently he had quite a bit written up for it, including the story for a few episodes, but the physical manuscripts were stolen, and the show Thundercats later came to be. Now, don't read too much into this. He didn't specifically say that the people who made Thundercats stole it from Gary Gygax. It's not hard to imagine two different people independently coming up with similar ideas. My interpretation was more that Gary Gygax could have been the creator of the Thundercats, but someone else ended up being that guy since Gary's manuscripts were stolen/lost before he was ever able to do anything with them.

Email ThisBlogThis!Share to TwitterShare to FacebookShare to Pinterest
Labels: TV