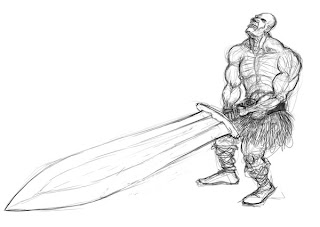 I like B/X D&D because of the simplicity. But that doesn't tell the whole story. The truth is that I like the simplicity because it allows me to add in my own style of complexity, which generally consists of good ideas stolen from other people.

Sometimes I can quickly get out of hand with this, so the strategy I'm going to try with my B/X game is to leave the core game alone as much as possible, and add the fun fiddly bits through items, special training manuals, etc. This way these things can be added in a piecemeal fashion, and it should be easier to adjust things than it would be if say I wanted to change something about how a class works and there's some dude that's already been playing that class for a while.

Let's face it, the old +1 sword is kinda lame, even if it's "+3 versus lycanthropes". Thanks to DCC and these funny dice I have, we can do a few things to add a bit of freshness to these more or less mundane magical items.

First, it should be noted that I am using Akrasia's class-based weapon damage rules. Keeping that in mind, we always have the option to "key" a magic weapon to a particular class, in order to keep the fighters happy.

In the beginning, magic weapons are going to fall into one of three basic categories: improved attack, improved damage, or special effects.

Improved Attack: This one is very simple. You get to attack using a d24 with this weapon rather than a d20 (averages out to a +2 to attack rolls). That's it. But this is very nice to have because let's face it, missing sucks balls.

Special Effects: The sky is the limit. Here are a few ideas, both magical and mundane, to get your brain churning: