Outland: My First Stab at OD&D

This is something I have had on the back burner of my mind for a long time. Last weekend, when one of the players in my Council of Thieves campaign cancelled, I seized the opportunity to set it into motion. I got my wife, my sister, my brother-in-law, and my little cousin together to play OD&D. I'll talk more about how the session went in a later post, but for now I'd just like to share a bit about the setting.

A while back, Il Male of The Yaqqothl Grimoire posted an awesome map for his Yaqqothl setting. This, in turn, inspired me to work on a map of my own, heavily based on his work:

This map is just a rough draft - a place for me to sprinkle in my ideas, but already I probably have more than we could ever get through. The goal is to follow James M.'s method, initially painting with broad strokes, seeing where play takes the party, and flesh things out as we go. The party started out entering the area, tentatively referred to as Outland (I'm open to more creative names if you'd like to offer any), through the mountain pass in the southeast. Their destination was the keep, and that is where adventuring began. 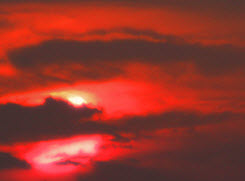 The first thing I dropped on the party to let them know that this place wasn't home was the fact that there was a second, blood-red "sun" low in the western sky, shrouded in black clouds. This second sun doesn't rise and set like the regular sun - it just hangs there in the west, unmoving. At night it isn't bright enough to illuminate anything any more than the moon would, but it gives everything a creepy red tone.

That's it. That's all the party knows and that's all I know. They can ask NPCs about it if they are curious, and they will likely get many different theories about what it is. The players will have to decide for themselves what it is, or perhaps discover more about it through play.

Here are some of the points of interest I have planned for the region:

I found this awesome painting on ArtOrder, which really got my brain stirring about this lost city, whatever it ends up being...

So there's the bird's-eye view of the place. A land of wonder and weirdness and potential death at every turn. My next post will be about what our first session was like, and I will be soliciting advice for running an old-school style game as well. There were a few issues that popped up, so I will need some help for sure!